In each year since I've been writer-in-residence at the 'Sick Kids', I've written a Christmas or winter-themed short story for adult readers. The first two were set at the current Victorian building at Sciennes, but for my final year, I decided to focus on the place to which the hospital will move in 2017 and where building is already well under way - Little France at Edinburgh's southern edge.

Short stories are mysterious and can be inspired by something as slight as an overheard snatch of conversation, a memory, the sight of a single shoe left somewhere. But for me they often arise from specific places. 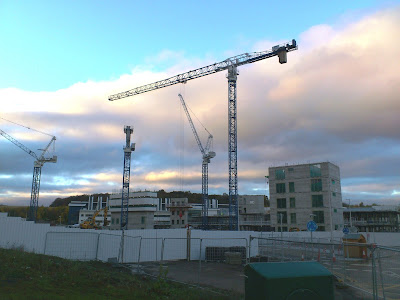 I started taking the bus out to Little France and walking around the building site for the new hospital, circling its high white enclosure fence and watching the cranes soaring and the buildings growing. I also walked through the public parts of its established neighbour, the Royal Infirmary.

I was curious about the name Little France and its history. Some say it's called after the residence of servants to Mary Queen of Scots, some believe it to be named after the French cloth workers who settled in this area in the 17th century. But in either case it is well documented that Mary Queen of Scots had stayed at nearby Craigmillar Castle, a fabulously evocative hilltop site which Illustrator-in-residence Cate James and I had visited with some patients as part of another of our hospital projects in summer 2015.

It's also well documented that Queen Mary was responsible for planting various trees around Scotland, including one at Little France which stood close to what's now the hospital's main entrance and was said to be planted in 1566 when she was staying at the castle. People still remember it being there in the 1950s, protected by railings as an ancient monument, but reduced from its former grandeur to a blackened stump by that time.


There's always research involved before finding the essence of a story. It's as if the story has always been there and the writer has to dig for it in a process of gradual discovery. For this one I consulted tree experts, both about historic trees and about tree cultivation. I studied historic maps of the outskirts of Edinburgh which recollected the tree, including this one from 1912. I found a 1905 postcard of the tree online (above). Brainstorming always helps, so I took my 'ingredients' to some youngsters on one of the hospital wards who helped me tremendously with ideas as seen in the storyboard. Their story isn't quite the one that I told in the end, but has some similarities.


However, there is always an element that arrives mysteriously; that offers itself up at the right moment. In this case it was a display of images, glimpsed as part of a temporary exhibition at the Royal Infirmary: lungs, looking so very like tree roots.

This final element, together with a quirky old woman who had been forming in my mind and a teenage boy from Craigmillar began to link into a narrative that belonged to the area of landscaping and tree-planting happening now between Old Dalkeith Road and the perimeter fence of the Sick Kids building site. Of course the teenage boy turned out to be there because he was visiting his mother in the infirmary, with a lung complaint. And of course her name was also Mary.

Posted by Linda Cracknell at 4:52 AM No comments: