Christmas has always been a poignant time and a time of generosity to patients. But it's also been key for the Hospital’s fundraising efforts which included the production of these calendars.

On 9th December 1878, when the RHSC was at Meadowside House, , the Duke of Buccleuch sent evergreens for Christmas decorations by rail from Dalkeith. On 17th December 1879 he did likewise but this time from , Dalkeith.

’s log book of 24th December 1895, less than a month after the hospital opened on that site, records:

‘School closed today for the annual Christmas and New Year …. As the result of a collection for a Christmas treat to the children in the Royal Hospital for Sick Children, now our nearest neighbour, the sum of £5 8/- was gathered, and with it there were bought a Rocking Horse and a Musical Box.’

The RHSC letter book records a particularly busy time for the RHSC Secretary at the end of 1895, just after the was opened. He sent out many letters including an account of costs for the building of the hospital which he calculated as £375 per bed. Three letters were sent on Christmas Day itself (but none, I noticed, on 1st January 1896). Over 28-30th December letters of thanks were sent for various donations for example for toys sent by Scotsman readers.

On 7th December 1935 a letter was received from the Forestry Commission showing that they would provide six Christmas trees 10-12 foot high to the 'Sick Kids' on 19th December. They did this again in 1937.

On 16th December 1935 a letter was received from the ‘Outram Press Wireless Fund for Scottish Hospitals’ regarding the delivery of a radiogram from Jenners to arrive on the 23rd.  The letter said:

‘The Outram Press Wireless Fund for Scottish hospitals, on behalf of the generous readers and friends of the Outram newspapers in Scotland and abroad wish the children of your institution a very happy Christmas and much joy now and in the future in the possession of the radiogram.’

They also sent with it children’s records including A Teddy Bear’s Picnic, Hush-hush Here Comes the Bogeyman which you can listen to/read here. 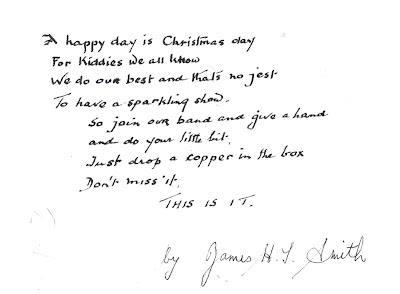 James Smith's daughter sent a letter to the Friends Foundation in 2013 explaining the origin of the rhyme above:

‘In the 1920s, Dad, James HI Smith, worked in the pathology laboratory in the Sick Children’s Hospital. He attended evening classes at the for arts and calligraphy in which he became an exponent. The Sick Kids Christmas party needed funds -- remember it is the 1920s -- and dad was asked by ward sisters to make two posters to attract party donations in the two wall mounted money boxes in the outpatient section. He took great care and deliberation over this task. He found the artwork easier to do than the rhymes to go with it! So, ‘a happy day is Christmas day’ is one of those rhymes. Can’t say what picture went with it. He made two new posters every year for a number of years. I don’t know how the party funds grew, but on an ordinary outpatient day, after a full morning’s work, the wall mounted collection boxes have been known to yield a half penny!
‘Dad left the Sick Kids in 1929 to work in the Royal College of surgeons as assistant to the conservator of the college museum, Dr Greig. But he continued to do the posters for the Sick Kids up to 1938. It was in 1938 that Glasgow held an ‘Empire exhibition’ in Bellahouston Park. The feature was a modern built tower for it. Dad copied the tower onto a poster and the appeal with it I think was ‘please make your Christmas party donations a towering success. Thank you.’ Then in 1939 the war started and I think the parties stopped. I have a very nice memory of being invited with my sister, mum and dad to the Christmas party. There was entertainment, then came Santa with presents hauled in a huge wicker laundry basket. As we were all seated, I guess the children were conveyed to a dining area for eats. We had ours in Sciennes School, laid out on little school desks with flat tops, buffet food. I loved the mini chocolate eclairs, they looked so dainty.’ 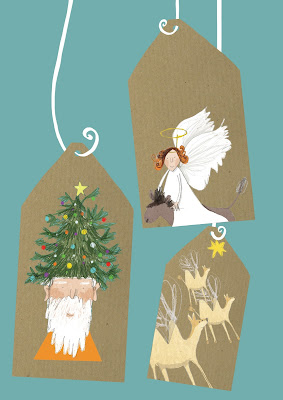